Lisa Lavender : In Her Words on #IWD

This year we are celebrating, no, embracing International Women’s Day at Adstream. It’s the first year we have really done this and it got me to thinking and reminiscing. Having worked in advertising and marketing for over 30 years now, I have seen a lot of change where women’s roles are concerned. I think I am lucky that aside from my first job, I have worked for and with some incredible women role models over the years both here in the UK and in North America. Those women shaped the businesswoman I am today.

Ironically though, it was a woman who told me not to bother when I was trying to get my first job in advertising way back in the crazy 80s. She herself was a secretary made-good, in those days many girls “got into advertising” via the secretarial route. Even my own mum insisted I took typing at college, something I have always thanked her for and never regretted sadly though to that generation a secretarial career was a “good back up for a girl” to have up your sleeve. This very first rebuff actually did me a favour. It toughened me up and made more determined to succeed on my own, it also made a lasting impression and to this day I offer as much opportunity and work experience in my power to anyone who asks for help.

After applying for a raft of jobs in the back of Campaign (none of which I understood or was qualified) my cheeky application letter landed me my first agency job in print production, a really male dominated discipline in those days. Very old school and very boozy. An eye opener for a 17-year-old wanting to make her mark in the glamorous world of advertising. My boss didn’t want his boss to hire a girl to help him, but he got me… 6 months of photocopying, filing and tea making and I earned my stripes and he learned the error of his discrimination. I made him look good!

On reflection, each generation of women has paved the way for the next, mine is no exception. For today’s girls, the work place is a very different place. We had to push ourselves to the front of the queue. We did have to endure the lewd jokes and sexist behaviour. There was no such thing as politically incorrect in those days. We learned to rise above it, accept that boys will be boys, but know we could do better. And we did.
Fast forward through agency and brand life. I was able to survive a few boy’s clubs, learning lessons along the way until I had the opportunity to start my own business and to do it my way. The Traffic Bureau (TTB) was born out of necessity in 1996. It was outsourcing before outsourcing was really a buzzword. Me, a Mac and a fax machine (yes you needed one of those at that time) and suddenly I was in business. Newly wed and juggling our home and family life. It was the most exciting and scary time of my life. When I look back now I wonder how I did it, but you do don’t you, you just get on with it and make things happen. I had amazing role models in my parents, incredibly hardworking (together 5 days a week – I don’t know how they did that for 40 years) and yet I never ever felt our childhood was compromised. So why wouldn’t I do the same? Why couldn’t I have it all too; a career, a home and a family.

TTB ironically mostly employed women, not by design, by accident and probably more by virtue of the fact that many great women have come up the ranks in the TV admin (business affairs world) and loved to live and breathe admin. So even though many of us went through the “girl power” era of the Spice Girls, we were girl power because we were good, really good and we became known as the TTB Ladies. When I sold TTB to Adstream in 2006, we entered a whole new world, one with boys in it and our day to day interactions shifted. These particular boys were great though, open minded, even handed and with a work hard, play hard philosophy. The culture was and is today unique and infectious. An adtech company that was going places and fast. Women and men of all ages, experience, and talents mucking in to make history, to change the face of advertising, technology, and ad delivery.

Today at Adstream, we employ over 600 people worldwide. 40% of these are women. We are proud to have women in C-level, Director and Managing Director roles, as well as our Chief of Staff, Client Relations and Product Development leads. For me, the people I work with are the most important part of my job and I am lucky to work with some wonderfully talented and hardworking women (the boys aren’t bad either). Seriously though, throughout our organisation, we believe in equal opportunity in hiring, encouraging and promoting all candidates regardless of gender. As we #pressforprogress with gender equality and gender diversity across all aspects of the media supply chain we have to remember, change starts at the top and set the right examples.

So, what’s next, how do we impart the professional rules on the younger generation while encouraging them to speak up, and speak out; to fight for their seat at the table. Well, if 2017 is any indication of what’s next, the future is bright, and filled with intelligent, passionate young women. Last year, the “millennial” generation proved they have something to say, and it’s a well-informed stance. If there is any proof of this, it’s the sheer volume of articles out there on this topic. Young women have shown that they are not afraid of disrupting the status quo, even if it has lasting career impact. In truth, that’s what they are aiming for – a lasting impact on the entire industry. I hope I can say the same when I retire.

Welcome to part I of our “3 steps to understanding…

The Power of Women in Adstream

If there were a consistent theme among the women of… 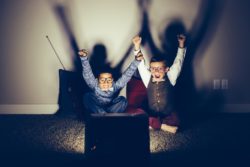 We have all been inundated with news stories that analyze,…

Thanks, it's been sent.